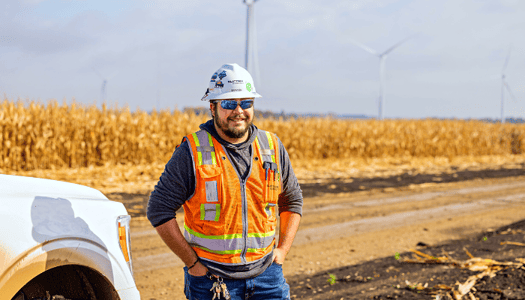 Brayden Overpeck didn’t consider himself an organized person before he started to work at Blattner.

In other words, you have to stay on top of everything that’s coming and going on a job site.

“After some time as an SIS, now I’m meticulous, even in my own house, when it comes to organization,” Overpeck said. “I have to know where everything is. It’s just become ingrained in me these past couple of years.”

Overpeck was placed into an SIS training program because Quaintance felt he would be a good fit for it. Since then, Overpeck has worked on four more projects with Quaintance while soaking up as much knowledge as he can.

“There is a sizeable learning curve for each new SIS. It usually takes an entire job cycle to get up to speed,” Quaintance said, “A good SIS is self-motivated, detail-oriented, and curious about new strategies and ways to make things more efficient. Brayden is all those things. He communicates so well with our site teams. He makes sure problems are handled before anything becomes an issue.”

Overpeck’s day-to-day work varies depending on where the renewable energy project he’s working on at the time is at in development. Each morning, he checks the shipping manifest to see what may be arriving on site. He conducts audits in the equipment trailer and then goes back to the office to enter the data he’s collected. Overpeck is also constantly testing and checking to see if the equipment on the site is working properly. If a piece of equipment is down, he’ll notify leadership and discuss how to proceed from there.

Blattner’s lean approach is our ingenuity inaction. Inside Blattner’s lean advantage you’ll find people at the core who deliver value through A Better Construction Experience with systematic processes, efficiencies, optimization and continuous improvement. 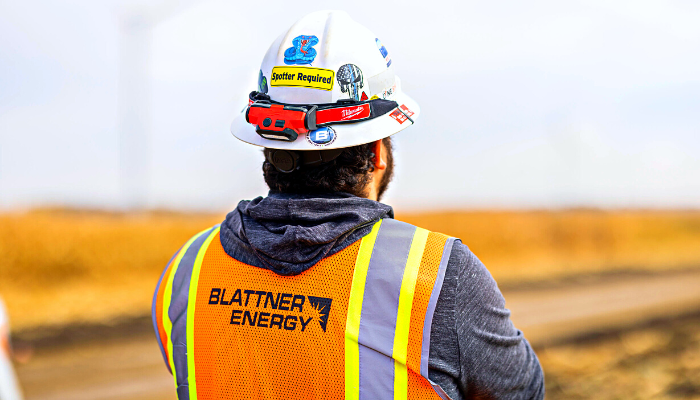 “You have to cover all the bases,” Overpeck said. “At the beginning of a job, you’re getting equipment and shipping trucks coming in constantly. You unload the trucks and count every item. You want to make sure you have exactly what you need. That can be tedious, but that’s the biggest part of the job. Inventory detail, equipment transfers – those are big things to watch.”

Overpeck, like every site inventory specialist, doesn’t want to miss anything. Sometimes, he’ll check things three times just to make sure everything is at status quo. It’s his duty to ensure Blattner is not spending or losing money where it doesn’t have to be.

“Every SIS has to be meticulous about everything,” Overpeck said. “The SIS team has helped reduce the company’s overall inventory losses. I know the field construction coordinators and everybody else on site feels less stress about that since we’ve been around.”

The Journey To Blattner

Overpeck spent his childhood in Hawaii. When he was 15, his family moved to Colorado for more career opportunities beyond the limited agriculture and tourism-based work prevalent in Hawaii.

“My parents wanted to give me and my two sisters more opportunities in the States,” Overpeck said. He lived in Colorado until he was 20. “I’ve been back to Hawaii twice because it’s a gorgeous state, but there isn’t much for work out there. The culture is laid back with very little stress, which is nice, but you can get too relaxed. I feel like healthy stress can push people to be better.”

Overpeck was referred to Blattner by his uncle, Jeff Stockton, a Blattner site manager. Overpeck said his mental health wasn’t in a good place before Stockton invited to join him on his first renewable energy project in Cheyenne, Wyoming. For one, he didn’t like the job he was at.

“I was in a dead-end job before Blattner,” Overpeck said. “But that all changed when I started here. I ended up enjoying the work and the people quite a bit. It’s like one big family on a job site. That family culture is so real and strong at Blattner. It really turned things around for me.”

Overpeck was also inspired by his uncle’s success at the company. Stockton had worked his way up from being a civil laborer to being a site manager. The background and knowledge that he had gained motivated his nephew.

“He gave me pointers and corrected me if I got something wrong, and in a way that was very encouraging,” Overpeck said. “I wanted to be a leader like he was. That influenced me to excel rapidly at the site inventory specialist job. I owe him a lot.”

All In The Family

Things have gone so well for Overpeck at Blattner that he has referred other family members for opportunities within the company.

His dad, John, and his sisters, Emily and Reaghan, also work for Blattner now. John is a site safety coordinator; Emily is a solar installer and Reaghan is a tractor operator. Overpeck hopes that one day they might all get to work on the same project together. 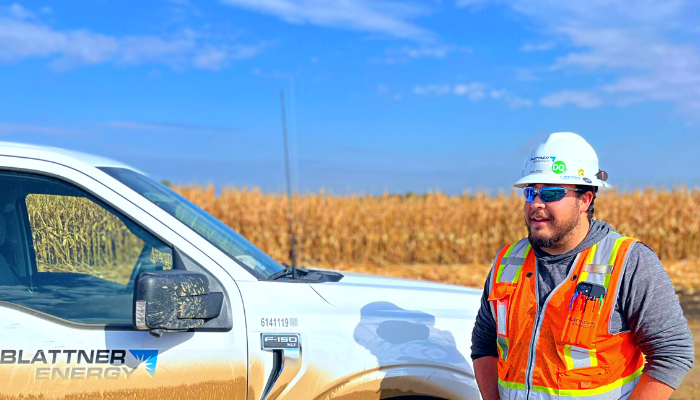 Brayden Overpeck talks about what a typical day is like at a Blattner Energy wind site in Minnesota.

John is a retired sheriff patrol sergeant, S.W.A.T. commander, firefighter and medic. John was retired and ready to be done working, but then Brayden changed his mind. Before being encouraged to explore a career at Blattner by his son, he had zero construction experience. He started as a roller hand at one of Blattner’s wind projects in Colorado in February 2020. John was blown away by the positive impact Blattner had on his son – and him.

“It was the first time I was able to see Brayden shine and truly love his work,” John said. “He never really had a job that was this demanding or rewarding. We talked about how working hard and seeing the results of his labor would develop pride in what he did. We knew he would be working with Jeff, who had known Brayden since he was a baby. That made it easier on me and his mom.

According to John, his wife, Kim, deserves a lot of credit for his son’s drive.

“When she gets her head set on a goal, she accomplishes it,” John said. “She expects her kids to give their best in everything they do as well. With Brayden, he can accomplish anything he desires. When he finds something he loves, he fully commits to it and gives it his all. I see him having a stellar future at Blattner because of his positive mindset and skills.”

Watching all his kids thrive in the same company makes John smile.

“I think it would be fun to work with all three of them at once,” John said. “Kim and I are proud of all three of our children for working at Blattner. Watching each of them thrive and bring their unique personalities and skillsets to their different roles at Blattner, and in life, truly makes our hearts happy.”

Overpeck’s different job site stops have included wind projects in North Dakota, Wyoming and Colorado. He has enjoyed each location along the way. However, his most recent job in Minnesota, where he further developed into the SIS position, has been his favorite.

“It’s been a great learning experience. This team here has been fantastic and has really helped further my growth,” Overpeck said. “With Paul here, we both have the experience of knowing how the equipment works, and how to keep track of it. The knowledge I’ve gained has made me more efficient.”

Part of the role of an SIS at Blattner is to have hard conversations with co-workers and superiors. For example, he might have to report that a $4,000 drill was lost, failed – or worse – stolen.

“We’ve been allowed to take the reins and run with our role here (in Minnesota),” Overpeck said. “You have to deliver bad news sometimes. Paul has taught me a lot about how to have those tough conversations.”

Overpeck enjoys being part of an ever-evolving company that pushes itself to improve, from a safety standpoint and from a financial standpoint.

“This is a great company to work for,” Overpeck said. “Most companies aren’t as inclusive as this one. I’ve enjoyed the people I’ve worked with very much and consider them my friends and family. Blattner has changed the way I look at work. There’s always something new to learn. People are willing to take their knowledge and help you understand the big picture.”

Quaintance sees a bright future ahead for Overpeck.

“Brayden is self-motivated and detail-oriented,” Quaintance said. “He’s always prepared to work. Brayden will be a senior SIS soon. I can see him taking a higher role in the company not long after that. He’s always willing to go the extra mile.”

To learn more about careers with Blattner, just click below.